The grayling season is well underway here in the UK, well technically it has been since July but most of us only really concentrate on them once the trout fishing stops in October. The initial part of the season has already been kind to me and I have landed 3 fish over 2lbs from two different rivers. The River Test in Hampshire gave me the first two large ladies in a ten minute flurry of action on the Wherwell beat, my French leader was tightened by a lot of grayling that day as the fish have not been pressured heavily yet and were not as choosy as they can be.

I have also been lucky enough to land my first Welsh 2lber from the River Irfon in mid Wales. It put up a good account of itself and I was pretty sure I would lose it as it twisted and coiled in the strong currents but thankfully my buddy Nick was there with the net and the result is below. 2lbs 2oz of prime Welsh grayling.

Nick also did rather well that day, but did not quite hit the magic 2lb mark. 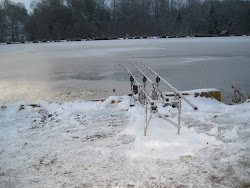 If anyone wants to arrange a fishing trip I am always on the lookout for fishing partners and the opportunity to fish new water. I live in Cardiff but am more than willing to travel for good fishing. If you fancy it my e-mail address is below, I will bring the booze!